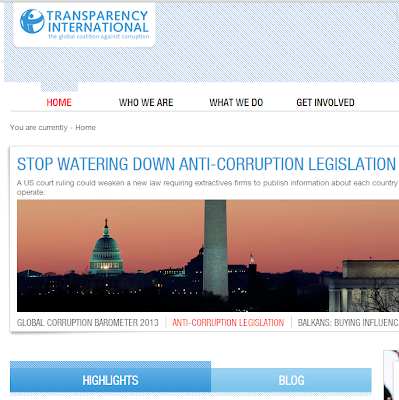 In a world driven by opinion and preconception, the results of a major survey campaign covering 114,000 respondents in 107 countries deserves attention. On air today, the BBC summarized the findings of the latest Transparency International survey of corruption across the world.

While initiatives such as eGovernment, open data and rapid information sharing through digital social networks should be making it more difficult for deal-making that includes bribes and backdoor quid quo pro, the worldwide evidence says otherwise.


The trend is, as the BBC notes, "depressingly" unfavorable to transparency. And while it's worse in third world countries, it is by no means limited to poorer neighbors. Corruption seems to attack institutions that democracies grant the most power: political parties, the police and the judiciary.

As the BBC writes:

There are some depressing, if predictable, trends. You are twice as likely to pay a bribe in a poor country as a rich one. In one in three countries, the greasiest palms belong to the police. In almost one in five, the judiciary. Overall, one in four people surveyed say they have paid a bribe.

Nor is it simply about discreetly folding money into an official's palm. It is political parties, "the driving force of democracies", as TI calls them, which are perceived to be the most corrupt public institution.

In delivering the results of its Global Corruption Barometer, Transparency International grimly notes that "27 per cent of respondents have paid a bribe when accessing public services and institutions in the last 12 months, revealing no improvement from previous surveys."