Would Your Employer Hide from PBS Frontline? 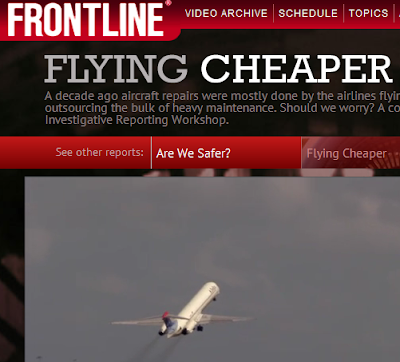 
The show aired reporter Miles O'Brien at the Maintenance, Repair and Overhaul (MRO) industry trade show asking a former United Airlines executive about this outsourcing. The executive invited O'Brien to visit one of their supplier's plants in China, and Frontline took him up on the offer. But shortly before the trip was to start, the trip was called off. No reason was given. O'Brien then resolved to visit a U.S.-based firm, ST Aerospace Mobile, a large Singapore-owned repair facility in Alabama.
ST Aerospace is a 7,000 employee global firm. Its Mobile subsidiary performs repairs for United, USAir and others. ST Aerospace would not agree to an interview with Frontline. Instead, Frontline staff had to rely upon secret video taken by current and former employees, and disguised voice-over interviews. Lacking its own on-screen voice, ST Aerospace had to reply to concerns over quality and workforce expertise in a letter. (Letters -- A quaint approach in today's e-media world. The letter is posted on the PBS web site).  A separate ST Aerospace email followed later.
Firms deserve the opportunity to defend themselves, and have the right to ignore requests for discussions when they feel it is not in their best interest. However, ignoring reputable outlets like Frontline creates the impression of an enterprise trying to shield themselves from the spotlight of transparency.
Fast forward to April and Southwest Flight 812. William McGee of Consumer Reports, who had also been interviewed for the Frontline story, revived the debate with his NYT op-ed piece on aircraft maintenance practices after a 5-foot hole opened up in a Flight 812's Boeing 737-300 over the Arizona desert. As one who has flown on Southwest out of Phoenix perhaps a hundred times, often over that same stretch of desert enroute to San Diego, the incident was of special interest.


Was this plane maintained at contractor Aeroman's facility in El Salvador, one of the several third party MRO facilities in the U.S., or at its in-house maintenance outfits in Phoenix, Houston, Dallas and Chicago?  According to news reports, the in-house Dallas facility performed the last "maintenance check" of the plane. Attempts at external transparency may be foiled, but in this comparatively regulated industry, there are likely electronic repair histories to be studied by those seeking internal transparency of quality procedures.


p.s. In the previous episode of this series, Continental Airlines also refused to be interviewed.
Posted by knowlengr at 22:03