Did Feds Sabotage B of A Transactions' Transparency? 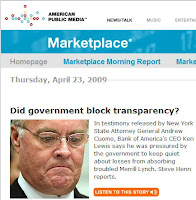 The plot line moved on to "stress tests" and additional capitalization through private equity, but last month's WSJ Bank of America story that got the Wonk's attention happened earlier. The Wall Street Journal's headline was "Busting Bank of America," but Marketplace had covered this several days earlier as "Did Government Block Transparency?"
The issue was how much pressure Henry Paulsen and Ben Bernanke put on the Bank of America CEO to proceed with B of A's acquisition of Merrill Lynch. CEO Ken Lewis was "having second thoughts," according to the story, and according to testimony released by New York state Attorney General Andrew Cuomo, Lewis was told he'd be fired if B of A didn't go ahead with the deal. Marketplace's Steve Henn interviewed Columbia's John Coffee, who said that this sort of arrangement resembled the Freddie Mac foreclosure prevention program that was going to cost Freddie Mac $30B; Coffee dubbed this tactic part of a "shadow governance regime." Coffee called for an independent agency to press for greater transparency and oversight.
The WSJ reported that "Mr. Lewis was considering invoking his rights under a material adverse condition clause to kill the merger." Lewis also disliked the dilutive effect the transaction (and others that followed) would have on shareholder value. Paulson, fearing public panic, was reported to have said "We do not want a public disclosure." Just whom could not be trusted with this knowledge is unclear, but WSJ reports that former SEC chief Christopher Cox and the Financial Stability Oversight Board (FSOB) were not among the privileged few.
Marketplace also posted the full text of Cuomo's letter on the subject.
Posted by knowlengr at 15:25